I can picture the day in my mind.  Eighth grade Algebra class, we had a substitute teacher.
An important detail only because of what was about to happen.  I was about to sneeze.

When I sneeze, I discharge a high pitched sound.  It has always been this way, for as long as I can remember and so forth presently.

If I had to describe it, my best account...a cartoon mouse?
It's not intentional.  It's just what happens when I sneeze.  If I could alter it (or any other unfavorable quality about my voice [pick one]) I would. 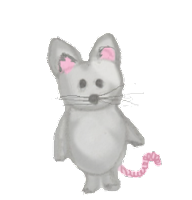 The truth, I never thought about it much.

I sneezed.  A few peers said bless you, as expected.

Unexpectedly, the substitute teacher halted her lesson and glared at me.
Daggers—at a child.


She said some choice words to me and told me to sign the infraction book.

The infraction book(s) existed in each classroom and kept an account of every time a student pissed off a teacher.  That's honestly the best I can explain the arbitrary nature of it's purpose.
If a student signed the infraction book 3 or more times in a week, they were prohibited from participating in "free hour" on Friday.
"Free hour" was the last hour of the last day of the week; students whose names stayed off of the infraction book or appeared 2 times or less were allowed to sit outside for an hour on Friday and socialize.
Students who exceeded their infractions were to sit in a room, study hall style.
The troubling thing, there were almost always more people in study hall than free hour.

I didn't want to sign it.  I had already signed it twice that week, like most weeks, for not very good reasons—and this, the most very not good reason of all.

Before I could object, I witnessed an astonishing event.

My classmates (all of them) stood up for me.

other people noticed me
and my behaviors.
It was noteworthy that they defended my honor.  They weren't about to let me get steam rolled by this substitute teacher
but
that wasn't nearly as cool
as learning
I was being listened to.

Things I said, did...
small gestures
something as insignificant as a sneeze...


That day, in that eighth grade classroom, I learned something profound.
I have an affect on people.  However small or superficial, however bad or however good, however temporary or lasting, however intentional or fortuitous.
Even if no one can hear me, someone is listening.

Thank you for listening.

A lover of:
Station Wagons, bowel movements, conversations about bowel movements, Irish Whiskey, guys who make me laugh, guys who bring me coffee at work, and cheese you can pull apart into stringy little strings.
Not a lover of:
Bigotry
Sometimes I say stupid things. This blog does a very good job of demonstrating that.

some good shits to read